Is it in you? That’s what Gatorade used to ask us when trying to sell us their beverage. Whether they were trying to encourage us to ‘be like Mike’ or to drink up life like a sport, Gatorade was convincing us they were the thirst quencher. That’s their story of success. But who are the people behind the scenes making sure that the product lives up to the billing? Meet Andrea Knight, 2012 Grace College graduate. A Biology major, Andrea began her career at Pepsico as a quality assurance technician. Three years later she continued with Pepsico, now as a Microbiologist.

Her Time at Grace College The first in her family to attend Grace College, Andrea has not been the last. Both her younger sisters attended Grace. In fact, Andrea and younger sister Clarissa both won the Dr. Yvonne Messner Athletic Award for Female Athlete of the year. Five years apart, Andrea won the award in 2012 while her younger sister repeated the feat in 2017.

While attending Grace, Andrea was a two-sport athlete, competing in both volleyball and track and field. That continues to be one of her favorite memories from her time at Grace. The other is the time she spent with Dr. Marcia Lee, baking sugar cookies at her home. Many of her memories, however, took place a long way from Grace’s campus. She traveled to the Dominican Republic and Africa with the volleyball team, as well as to Santa Barbara, California with the track team.

Her Journey to Pepsico

Andrea’s journey to Pepsi/Gatorade was a blessing from God. It all started when she gave her information to a recruiter for a friend. This led to her connecting with the recruiter for a placement. The recruiter set up several interviews for Andrea, but none of them were the right fit. After several discouraging interviews, Andrea had the opportunity to interview at PepsiCo. She received a job offer the next day and began working at PepsiCo (Gatorade) the following Monday.
Andrea’s job is to test the different aspects of what goes into making Gatorade. You may think this elixir just magically appears in those bottles, but that is not true. The quality of the sucrose, water, air, and sanitation is evaluated by Andrea. She does this by collecting and plating samples, then reading and interpreting the microbial data.

But Andrea is not spending her days surrounded by test tubes and beakers. She has also had the opportunity to manage the sanitation group and schedule. Her time has also been spent managing various innovation projects from research and development. She leads the Diversity and Inclusion groups at the Indianapolis Gatorade facility where she works. Andrea has had the opportunity to host the Indiana Pacers for a day. She talked with them about the process and the people behind what they are drinking to stay hydrated during workouts and games.
Her company partners with the United Way of Central Indiana. Andrea has led that campaign for the last three years. Last year her site alone donated over $50,000 to charities, the largest contribution they have given in 5 years. To honor the efforts of her company they were nominated for the Company That Cares award. What does the Future Hold?

Andrea has future plans to go back to school to get a degree in Event Management. She discovered her passion for planning while working on several events. These included two employee recognition parties for work and her sister’s wedding.
Getting married this summer, we know her life now includes some twists and turns. No doubt your life also has some surprises in store. Attending college doesn’t have to be a question mark. Give us a call and find out how Grace can equip you for life’s journey.
Learn More About the Biology Major
Share on Facebook Share on Twitter Share on LinkedIn Share on Pinterest
Tagged With: School of Arts & Sciences Numbers Do Lead to People 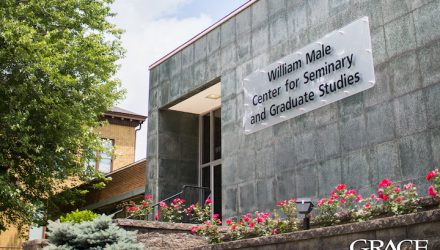