*As featured in the Grace Story Magazine

She grew up in Dallas, Texas, with parents who valued tradition, good manners, family and above all else — Jesus. Without fail, she and her siblings arrived promptly at the breakfast table with beds made and teeth brushed for daily devotions.

But although Robinson inherited her social graces and a hospitality that knows no boundaries (and a devotion to sweet tea), she also gained a fierce love and respect for her Afrocentric heritage, which God nurtured into a passion for diversity, equality and justice.

Growing up, Robinson was the shyest of the bunch, but at a young age she discovered her voice through writing. As a teenager she wrote for local newspapers and went on to earn her bachelor’s degree in English. She advanced quickly in the mass media industry, working in radio and co-authoring numerous books.

Even though her parents had founded a church and were prominent ministers in her community, Robinson never imagined working in full-time ministry. “My parents are my hero and shero,” she says, rattling off their achievements. “Ministry was part of our family DNA.”

So when God began to stir Robinson’s heart towards ministry work, she was startled. “I always thought I’d cheer my parents on from the sidelines,” she says. But she couldn’t ignore the incessant call. She took a job as the church receptionist at her parents’ church, to the horror of many in her community. “No one could understand why I’d leave what they saw as a prestigious, influential job to answer phones.” Frankly, in some ways, neither could Robinson, but by faith she obeyed the call and would later look back on it as the first big “sovereign shift” God made in her life.

It was at the receptionist desk, doing small tasks of service, that God equipped Robinson for future shifts. “We are not our title,” says Robinson. “People will lift us up or put us down depending on it, but we are who God says we are.”

Robinson worked for eight years at her family’s church, Concord Church (Dallas, Texas), ultimately serving on the ministry staff, when God shifted her again. She moved to Birmingham, Alabama, to attend Beeson Divinity School (Samford University), to pursue a master’s degree in divinity. Forty days into the semester, her father died. It was the hardest season of her life, wading through her grief, being so far from her family. But as she says repeatedly: “There are always rainbows in the storm.” During her time at Beeson, she met her husband, Tim, and after graduating, accepted a job offer to join the ministry staff at a church in Harlem, New York.

Dallas and Alabama gave her the gift of theology, she says, but Harlem gave her a social consciousness. It’s where she saw the gaping disparities in equality and justice, created by racism and sexism and classism, and she grew a social voice. “My daddy used to say, ‘A Bible in one hand and newspaper in another; we need them both to make a difference,’” remembers Robinson. “For me, that’s exactly right. It’s biblical reconciliation and biblical justice. We can’t have one without the other.”

After serving on the ministry staff in Harlem, Robinson returned to Concord Church and served as the director of growth for several years. In 2015 she founded Cross Spring Ministries, began her doctoral work at Truett Seminary (Baylor University) and served as a ministry consultant and national conference speaker. It’s how Grace College & Seminary first met Robinson. Dean of Chapel Brent Mencarelli (MDiv 13) invited Robinson to speak at chapel, and the truth and grace and love she displayed for students was so transformative that she’s been invited back every year following.

“About two years ago, I remember returning home from speaking at Grace and telling my husband that if Grace ever was interested in hiring me, I’d want to go. I never imagined in my wildest dreams it would happen. And at such a time as this.” Just before the COVID-19 lockdown, the closing of campus and the murder of George Floyd, President Dr. Bill Katip (BA 74) offered and Robinson accepted the new full-time position of associate dean of diversity and inclusion.

Since beginning the job in March, Robinson has been in countless (Zoom) conversations and meetings with Grace students, faculty and staff about how to allow this season to bear great fruit. As she talks with Black students, she’s helping them navigate their grief and find ways to heal from their trauma.

She plans to move to Winona Lake by the end of September, where she’ll continue her work to promote equality, diversity and inclusion in programming and student care on campus. She will also advise the administration on issues related to diversity and underrepresented student populations and serve as the adviser to the Black Student Association. “I want to be clear that I’m coming on board to advocate for all students,” Robinson says. “We can’t move forward in Jesus without one another.”

Robinson: I’m devastated, outraged, hurt, angered. As we continue to grieve, we also must commit to turning our anger into action. I’m more passionate now than ever about speaking on social justice and equality and the actions we’re going to take to establish it. Growing up in the South, in a pastor’s home, sometimes we can be taught to be polite more than honest. We don’t say things if we think they might offend. But I realize more fully now that staying silent only causes more trauma. I’m still going to be polite, but not at the expense of telling the truth. Sometimes we have to tell the truth at different volumes; sometimes it’s like crushing up aspirin in orange juice, but we must share it. When we don’t tell our stories, people don’t think racism is systemic. We have to participate in conversations that are uncomfortable and commit to that tension because it will produce change. I cannot be a voice that unifies and reconciles without being honest.

Grace Story: What kinds of questions should we be asking ourselves and others to affect real change?

Robinson: Are Black Americans, Asian Americans, American Indians and Latinx Americans in your inner circle? Are they on your board and a part of your staff? Are they in your church, school, club or organization invited and free to initiate change? Are they part of your policy making? Do they show up on your speaker lists? Do you support their charities, nonprofits and ministries? Posts are nice. Power moves are better.

Grace Story: How can white people become allies in the fight for equality and justice?

Grace Story: Why are having conversations so important?

Robinson: Conversations about equality and justice reveal disparities. Right now we’re in the middle of a three-pronged pandemic: health, racial and economic. Ask yourself, who do I know that has died from COVID-19? Who do I know who has been laid off or furloughed? When we have these conversations with people who are different than us, we realize our realities are different. Black and brown communities don’t have access to the resources that so many white communities have and that has consequences. It’s critical that we understand why those communities don’t have resources, to get to the root of the disparity, before we can dismantle the systems and structures and policies that led to them.

Grace Story: What is giving you hope in the midst of collective and personal grief?

Robinson: In this season like never before, people are open. This is not a moment. This is a movement. That word, “movement,” can make people nervous, but what it means is, this fight can’t end when the news stories fizzle from headlines. This commitment to one another, to equality and diversity is a lifetime commitment. We are living in the midst of a historic civil rights movement. White and Black and brown people are uniting for Black lives right now.

Grace Story: Why come to Grace?

Robinson: We are seeing cultural humility. White people are calling and texting and asking, “How can we support you?” And this generation is not just about lip service; they’re about a movement. And Grace is a place that is walking in cultural humility. That is working on not just talking about racial equality and justice, but taking action now and making plans for the short term and long term. Grace is a place that wants to be a community of cultural competence. They are for a greater future. I can’t bring that about, but God can, and I’m thrilled to be a part. 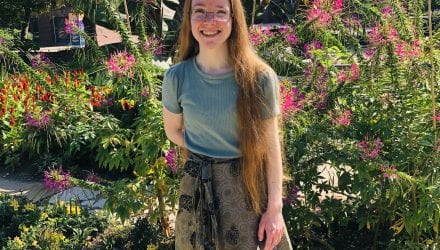