Ben Key of Ashland, Ohio, was well acquainted with Grace College from a young age. Coming from a Grace Brethern Fellowship church, many of his family members and even his siblings attended the school, and that’s exactly why he didn’t want to go. Now a licensed counselor with not one, but two degrees from Grace, Key says his Grace education – which has saved him time and money – was key to his success.

How did you first hear about Grace?

I grew up in Ashland, Ohio, and I first heard about Grace through some family members who are Grace Brethren pastors. I also grew up in a Grace Brethren church and I had siblings and family who went to Grace. So, I initially planned on not going to Grace to get a new experience away from my family. I actually was planning on attending another Christian school in Indiana. But my visit there wasn’t the greatest, so my parents suggested that we stop by Grace on the way home. I met with Dr. Slaughter who talked to me for about three hours, and after that meeting, I knew Grace was where God wanted me.

Why did you choose to double major in psychology and criminal justice?

I did a lot of work with my church in Ohio with an organization called Haven of Rest which does work with domestic violence and homelessness. In doing that, I got to be involved in organizing a project with them and got to know a lot of the people there. As a result, I felt that God was tugging me toward that ministry. I also wanted to be a cop, so I thought I would add a criminal justice major and just see how it all turned out.

Did the opportunity to get an accelerated psychology degree influence your decision to attend Grace?

I remember hearing about the accelerated psychology degree option while on my campus visit. It was a fairly new thing at the time, and not many other colleges were doing it. It was especially appealing to me because I took advantage of dual credit opportunities in high school. So before I started college, I was almost a sophomore based on credits. I thought, The faster I can finish this, the better because I knew that I would have to go to graduate school. And I ended up completing my undergrad in two and a half years.

When did you land on pursuing counseling?

I landed on the counseling route going into my second year. Dr. Roberts was very helpful in coaching me in terms of what to do next. I was pretty anxious about making those decisions, but he pushed me pretty hard to move forward. He enrolled me in some “probationary” graduate classes at Grace to see what master’s level courses were like. It was really helpful to have someone with experience in the field to guide me through that transition.

Why did you end up deciding on staying at Grace for graduate school?

I was always told not to go to grad school the same place you get your undergraduate degree – which is a huge lie. I was looking into different schools, but really what it came down to was that by the time I was rolling into the graduate program, I could graduate from Grace’s clinical mental health counseling program in two years, while anywhere else it would be, four, five or six years. So the decision was based on timing, and financially it made way more sense. But once I got into it, I really appreciated the program itself. The biggest concern I had was that it would be more geared toward pastoral counseling and lack the clinical knowledge that is needed, but that was not the case at all. I think they do an excellent job at blending the two and helping you integrate faith into your clinical practice.

What did those years of graduate school look like for you?

A year into grad school, I got married and moved to Fort Wayne. So that required me to commute to my full-time role as program coordinator at Lifeline Youth and Family Services in Pierceton and Grace’s campus. It was full-time work, full-time school, and the full-time life transition of being married. Further, when I was doing my clinicals, I would go to work early, then I would go to my clinical sites and class, then do homework wherever I could squeeze it in. It was a lot to balance, so I decided to lay off classes and take the program at a slower pace to create a better balance with life.

At the end of graduate school, there are three tests you have to pass. The first one is the CPCE (Counselor Preparation Comprehensive Examination). That is a national exam that you are required to pass in order to graduate. After I passed that exam, I took the NCE (National Counselors Examination) which you must pass in order to be licensed in the state where you live. Almost immediately after graduation, my wife and I decided to move back to Ohio to be close to family, so I applied for an Ohio license, and we moved to Wooster.

Once we moved, I settled into the job I still have now at The Counseling Center of Wayne & Holmes Counties as an outpatient therapist where I work with individuals, families, couples, and kids 12 and over. I recently passed my NCMHCE (National Clinical Mental Health Counselor Examination), and now I’m in the process of applying for independent licensure in Ohio which means I can become an independent provider.

What are some of your long-term plans?

Eventually, I do want to open my own practice. There are a lot of costs and energy and planning that go into that and I am working to find how that fits with my families needs and our goals. After all the work that it requires to obtain independent licensure, it is a big step to then have to think about opening a business. I also really like teaching other people, whether it be other clinicians or students – I would like to do that at some point.

Now that you are at the end of the long road to licensure, what are some of the benefits of an accelerated psychology program for undergrad?

The biggest thing it gave me was time. If I would have done both of my bachelor’s degrees at a traditional four-year school, it would have taken five years. And if I did a traditional graduate program, it would have been another four years, so there is a very high likelihood that I would still be in graduate school right now. My accelerated psychology degree put me ahead. I’m able to start paying off loans and provide for my family and future financial goals. Even professionally, the ability to license earlier has opened opportunities for me that otherwise would have been limited.

There are a lot of hoops to jump through in the field (and they are there for good reason), but the accelerated psychology degree gave me the opportunity to do that in a very efficient way.

What are some of the fears or misconceptions about the accelerated psychology degree that should be debunked?

I think one of the questions I asked was, “Will I be undersupported through the accelerated psychology degree?” I didn’t feel that way at all, and I think that comes down to the culture at Grace. There wasn’t a single professor that wasn’t there to be supportive and helpful. I was able to really connect and latch onto some of my professors and clinical supervisors. That was a huge benefit. I know people at other schools who didn’t have that. So I’m really thankful.

Also, the accelerated psychology program didn’t take anything away from the college experience. You just make friends with people at your pace, so it doesn’t disrupt the relationships you form or the experience you have.

Are you interested in an accelerated psychology degree? Learn more about how to get a degree in three years at Grace. 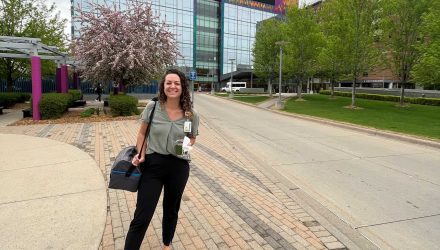 How to Become a Child Life Specialist